THE INFLUENCE OF CLIMATE CHANGE ON THE PRACTICE OF SURGERY:
The Scientific and Public Policy Implications 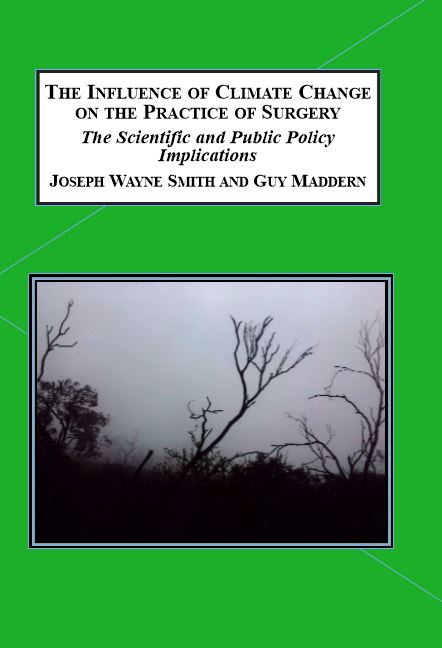 “The innovative direction taken in this book is to consider how climate change in the 21st century will impact upon surgical practice… this book is the first in the world, as far as I am aware, to discuss the relationship between surgery and climate change. The argument is bold, but well-reasoned and evidence-based. It is an important contribution to the filed.”
-Professor Emeritus David Shearman,
Discipline of Medicine,
University of Adelaide

“This short book brings a surgical perspective to climate change. Like a good surgeon, it is direct, realistic, unflinching, and solutions-oriented. Usually, it considers both the effects of climate change on surgical practice, and the contributions of surgery to climate change, pointing the way toward both mitigation and adaptation. A fascinating contribution to the literature of climate and health.”
-Howard Frumkin, M.D., Dr.P.H.,
Dean, School of Public Health,
University of Washington

“If you’ve ever wondered about climate change, its effects on surgery and conversely surgery’s effects on climate change then this well researched book written by an eminent Australian surgeon and lawyer is for you.”
-Dr. Forbes McGain,
Anesthetist and ICU Physician,
Western Health, Melbourne

“Joseph Smith’s team has once again delivered a timely, insightful and urgent call for a swift international response to the crises posed by climate change. This new text builds on the known human health impacts of climate change by documenting its reciprocal relationship with surgical practices: surgery has a significant climate footprint, and the changing climate will irrevocably alter surgery, particularly with respect to overwhelming increases in demand. Quite simply, humanity has no choice but to respond to Smith and Maddern’s call – either with a radical restructuring of its social and economic systems, or in resignation to its collective demise.”
-Professor Susan M. Koger,
Professor of Psychology
Willamette University