Vlfberht, The Sword Master: A Re-evaluation Based on 9th-11th Century Swords with the Signature Vlfberht on the Blade and on Contemporary Written Sources 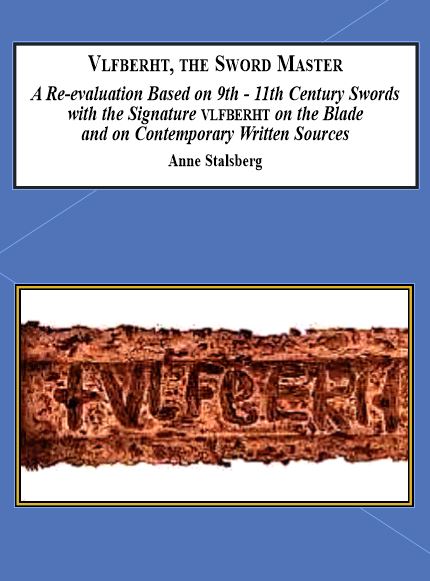 This study contains information about 167 swords from 23 European countries. These swords are kept in several museums in Europe (and one in the USA). Apart from the swords in the museum where I worked for 40 years, the 167 swords, about which I have collected information of different qualities, constitute as a basis for a discussion of who and what Ulfberht may have been, - a question which may be studied based on only mediaeval written sources. The discussion of Ulfberht’s position in the sword production is the main issue of this book, since it needs critical discussion. This study is based both on archaeological and historical, i.e. written mediaeval sources.

"This means that archaeological datings of the swords also date the VLFBERHT sword signatures and constitute the chronological and geographical distribution of the sword finds, and they give the basis for discussing who, what, and when Ulfberht was active, if it was the name of a person and the question of where the swords may have been produced and to where they were sold or ended up there by other means. The search for a possible identity of Ulfberht and of VLFBERHT on the sword blades are written sources used in this book in the search for his identity."

3. Variants of the Signatures and the Reverse Symbols

6. Addendum: Other Signatures on Sword Blades

9. The Dispersion of the VLFBERHT Blades into Pagan Europe