Why it is Impossible to Write a Biography of William Shakespeare: Multiple Names, Contradictory Sources, and Political Purposes 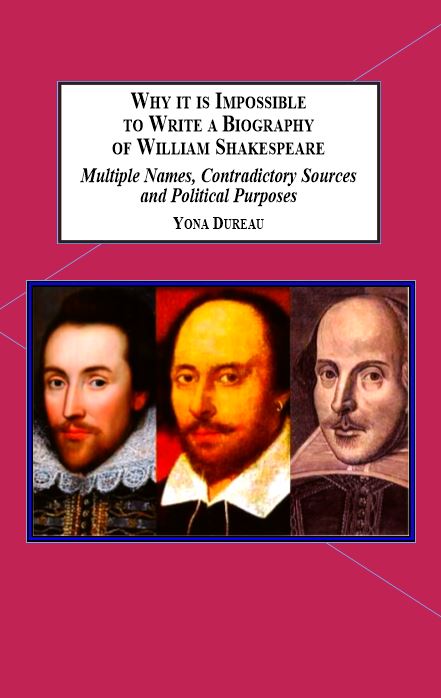 This book examines the scholarly research and investigations into the life of English Playwright William Shakespeare. Dr. Dureau sets to out show that writing an accurate and factual biography of Shakespeare is troubled by contradictory sources that use various names with varied political agendas. The book includes 21 color photos.

"Professor Dureau’s re-reading of Shake-speare’s biographers, the “proof” of his life as a player and dramatist undergoes radical revision; while what she argues will not sit well with traditionalists-an admittedly vague and troublesome term for such a vast critical field as Shakespeare studies-her arguments will accomplish what all good criticism should. Her work will open dialogue that challenges the reader to return to the collected, historical accounts of the poet William Shakespeare."
Dr. Wayne Narey, Arkansas State University

"Yona Dureau skillfully sketches the literary and historical debate over the identity of the author of the plays signed Shakespeare, underlining the weight of governmental and institutional pressure in the matter. Pointing out the contradictions and anomalies in such life-stories of the author as have been complied, she shows how elements from the plays have recurrently been used in attempts to assess the author’s religious identity or to fill gaps in his life story."
Prof. Monique Venuat, Université Blaise Pascal

Chapter II: Everything You May Read about William Shakespeare and the Motivations for Creative Biographers

I. The Axes of (Creative) Pulsion: The Disappearance of the Author's Body

1. Pulsional Tension and Agony in the Absence of the Writer's Body
2. Social and Academic Reasons to Follow the Golden Path of Forerunners

II. The Paradoxical Biographical Creation: The Lack of Evidence as Evidence

III. Shakespeare's Writing as the Source instead of the Playwright's Biography

Chapter III: Everything We Should Bear in Mind When Engaged in Some Historical Research

I. History and the Search for Documents

1. Documents and Comparison of Sources as a Key to Historical Research
2. Reading Documents in a Different Light

3. Definition of a Historical Document

II. The Independence of History from Authority and Government

1. Science as Independence from Religion and Government
2. The Organization of History in Society and Its Impact on Writing History

IV. The Limits of Ideology

I. The Existing Documents

II. The Absence of Links between London Shakespeare and Stratford Shakespeare

III. Reviewing the State of Our Documented Knowledge

Chapter V: In Search of the Lost Shakespeare

I. Elements Pointing to Existence of Two Different William Shakespeares

1. The Historical Evolution of the Strangers' Churches
2. The Jansen Monument

III. The Paradoxical Link Between Stratford Shakespeare and London Shakespeare